The League converts the format of New Jersey Municipalities magazine back to its original robust monthly edition (that is published nine-times per year).

As the Legislative Session opened, the League of Municipalities put forward a local budget reform plan that had been carefully developed over a number of months. The Legislature rejected that proposal, but it had some impact of the ultimate enactment, the Municipal Budget Act of 1936, which did not include a cap on local revenues. Before signing the measure into law, Governor Harold Hoffman said: "I am convinced, and I believe that time will prove my point of view correct, that this law can never be carried fully into effect until we broaden the tax base so as to replace property taxes with other sources of revenue and reduce property tax rates..." 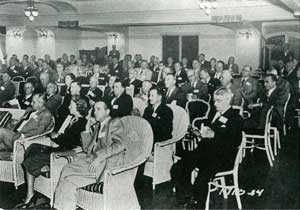